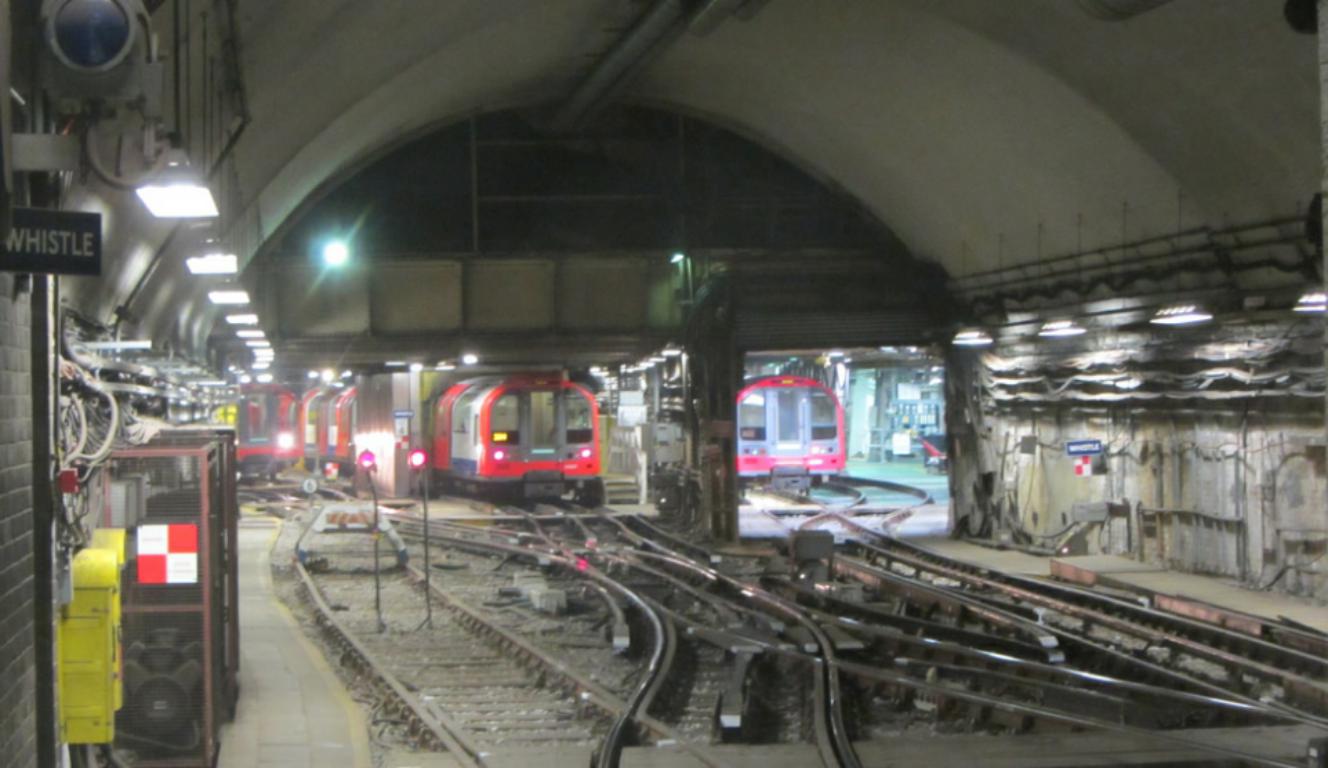 Creating the Waterloo and City Railway

The Waterloo and City railway began as a series of proposals to construct a railway to connect the mainline station at Waterloo to the City. The first proposal was made by the London and South Western Railway (L&SWR) with their new station at Waterloo Bridge which was located a short distance from the City. The initial proposal was to construct an extension to London Bridge, however this proved prohibitivly expensive and was abandoned.

The South Eastern railway constructed an extention to their railway from London Bridge to Charing Cross, there was a connecting line constricted however the companies where competing and their relationship turned hostile. The junction became disused by the end on 1887. An immediate station was opened as Waterloo Junction during January 1869, however through tickets where not avalible and the onward connections where frustratingly unsatisfactory.

The Waterloo and Whitehall railway began promoting an underground railway connecting Waterloo and Great Scotland Yard in 1864. The proposal was to create an air pressure propelled vehicles heading northwards and to use their exhausts to travel southwards. The railway would have three vehicles one at each terminal and one enroute in the tunnels; the vehicles would pass at terminal stations, the services would also include three class accommodation.

Work began on the 25 October 1865, however the railway had inadequate funding. The railway proposed a series of time extensions to allow them to raise the necessary capital, this was granted in 1868. With these assurances the railway still struggled financially because investors refused to invest due to a lack of confidence in the scheme. An independent Waterloo and City railway was proposed during 1881, the railway would require the constriction of a surface building at Queens Street and would cost an estimated £2.3 million, the proposal collapsed.

A bill was introduced to parliament during November 1891, to allow the construction of an electric railway between Waterloo and Mansion House. The proposal was considered with three other proposals, construction using the cut and cover method or a viaduct where strongly impracticable. Progress of the bill was slow, with the London County Council insisting that a tube-train would be too small and trains arriving at Waterloo should be extended with a new subterranean mainline termini the approximate size of Waterloo beneath Bank. Despite these concerns, the bill received Royal Assent on 27 July 1893 as the Waterloo and City Act 1893.

Construction began on 18 June 1894, with staging on the river Thames approximately 150m (500ft) from Blackfriers Bridge. Piles where driven into the riverbed to construct two shafts 4.9m (16ft) in diameter. The average depth of the tunnels would be 14m (45ft) below the surface, however under the Thames the tunnels would be bored to a depth of 19m (63ft). The tunnels began being bored using the gatesheild during November 1894 with the excavated material being removed via the shafts located near Blackfriers.

The railway was conveyed by a narrow gage twin overhead trolley wire, mostly for current return rather than using the tracks. The trains where provided by Seimons and two where in use during August 1895, with another on order.

The signalling on the railway was operated by a signal box located in the southern end of the northbound platform at Waterloo, with another box being located on the southern end of the northbound platform at City. The railway used a conventional semaphore signal at Waterloo with the remainder of the signals being lights only. The railway would also be fitted with an electrical traction current interrupt system, which has a contact bar on the signal, when the signal is not at danger the bar would be isolated. However, if the signal was at danger, the contact bar on the signal would connect with a slipper installed on the contact bar, which would trip the traction.

Operating the Waterloo and City Railway

The Waterloo and City railway opened on 11 July 1898 by Prince George, the Duke of Cambridge. Four hundred people travelled from Waterloo to City and back to Waterloo again as a part of the opening ceremony. The railway, however, was not opened to the public for a further four weeks because there was no arrangement with the London and South Western Railway (L&SWR) to provide staffing. The first public services began on 8 August 1898 at 8am, with the trains leaving the termini simultaneously There was a single class and a flat faire of 2d which was collected though a turntable, there where also return tickets, season tickets and add-on tickets to the surface available.

During 1900 the turntables where removed and replaced with conductors on the trains using 'Bell punch' tickets. The railway proved to be a huge success with steadily increasing passenger numbers, however this meant the railway quickly began operating at capacity the railway was its busiest during the morning peak with a steady stream of passengers during the day. There was no consideration to operate the railway on a Sunday because the projected passenger numbers would not be able to fund the expense of opening.

To resolve the issues with operating at capacity in spring 1899, an order for five new motors was placed. The order would consist of DM at half the size of the existing stock and two traction motors per train, the noise would be reduced by using a single reduction gear. The cars arrived during February 1900, with the cars entering service during the spring. The new cars where used to provide their service during peak hours and the older stock during off-peak services.

During the Extraordinary General Meeting for the London and South Western Railway (L&SWR) in 1906, proposed absorbing the Waterloo and City railway outright. The proposal was presented to parliament and approved with the enabling act receiving Royal Assent on 20 July 1906, these changes took place effective from 1 January 1907.

The London and South Western Railway (L&SWR) began to electrify their mainline suburban lines in 1915, this entailed the construction of a large electric generating station which was constructed at Wimbledon. The Waterloo and City railway began to receive its power from this plant during December 1915, the original power source for ancillary, heating and lighting in the London and South Western Railway (L&SWR) main offices. With this transfer of power source, the opportunity was taken to change the voltage on the railway from 530v DC to 600v DC.

During 1921 it became desirable to extend the morning peak services, the railway responded by obtaining four trailer coaches to the original specification, these where constructed at Eastleagh and allowed for a 24 five-car services per hour service.

The London Transport Passenger Board (LTPB), in 1934, proposed an extension to the railway along with an intermediate station at Blackfriers allowing interchange with the District line. The railway would be extended to Liverpool Street and Shoreditch, then running over the East London Line, would terminate at New Cross and New Cross Gate. Nothing happened regarding these proposals.

The Southern Railway undertook a review to the technical aspects of the railway in 1937. This led to an order for a new rolling stock, formed of five carriages along with the provision of escalators at Bank station. With the country going to war on 3 September 1939, the plans to install escalators at Bank was abandoned, however the provision of new rolling stock was too advanced. The contract was passed to English Electric and 12 motors and 16 trailers where constructed in Preston.

The older rolling stock was removed on 25 October 1940 and the new rolling stock was implemented on 28 October 1940. The introduction of a third rail began in January, however was not live when the transfer took place. The signalling was also upgraded to an automatic signalling system with train stops, the signal box at Waterloo station was retained however the signal box at Bank station was removed. The new stock did not require a travelling conductor, tickets where issued at each terminal. When the railway reopened on 28 October, City station was renamed to Bank to conform with the London Transport Passenger Board (LTPB) station.

Towards the end of the 1980s, the rolling stock was becoming increasingly unreliable. New vehicles for the railway where added to an existing London Transport order for the Central line. For these new rolling stock, a fourth rail would need to be implemented to conform with the standards of the London Underground network.

The old rolling stock was withdrawn on 28 May 1993, the service was suspended and replacement buses where provided. The service was not restored until 19 July 1993 with an increased service frequency, a train every three and a half minuets.

The Waterloo and City railway passed to Transport for London on 1 April 1994. A new timetable was quickly adopted on 15 April 1994, with three trains operating every 10 minuets.

The service was suspended from January 2003 for three weeks to allow for safety checks following a derailment on the Central line. The rolling stock was successfully modified, with various upgrade works taking place at the same time.

During the London Olympics and Paraolympics in 2012, saw the railway operating a Sunday service, between late July and early September. The railway was also used to ease congestion while the Northern line was closed due to upgrade works, for the Easter Sunday and Monday in 2013 and the weekend of 14 July 2013.

The original wooden-built trains survived until 1940 when they were replaced by specially designed tube-sized cars embodying the relatively unrefined technology of the Southern Railway's surface stock, which had been superseded on the Underground several years earlier. These trains were to survive until 1993. In 2006 the line underwent major upgrade works which included: new track, improved signalling and new-look trains. From early 2007 there will be 20 to 25 percent more peak-time trains.