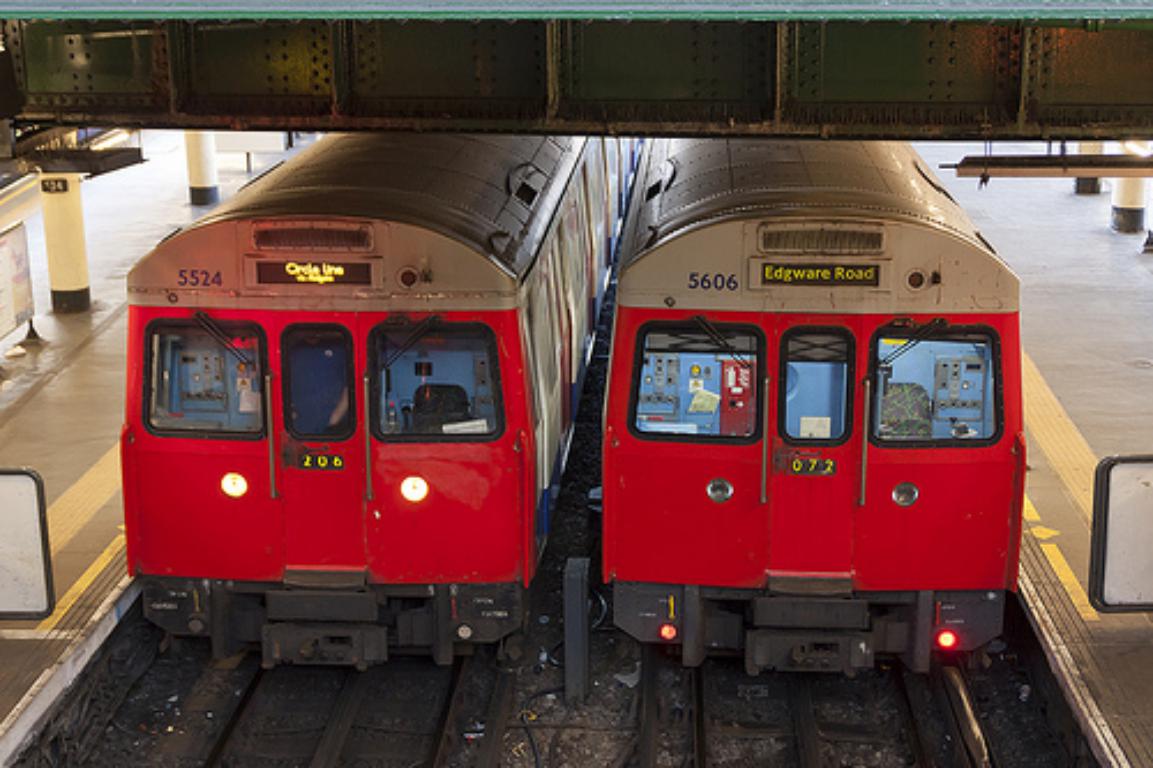 The C69/77 stock operated on the Circle, District and Hammersmith and City lines between 1970 and 2014, these where superseded by the S7 stock.

The C69 stock was ordered from Metropolitan-Cammell in 1968 to replace the O and P stocks that where operating on the Circle and Hammersmith and City lines. The delivery was planned for 1969 however trials on a four-carriage unit delayed this until the summer of 1970 and the first train entered service on 28 September 1970.

The stock was constructed from a load-baring aluminium frame with a non-load-baring body of riveted panels on aluminium framing. The carriages where fitted with four double sets of air-operated doors per side, to allow for a fast loading time because of the high density of the Circle line, there where mainly transverse seating with a total capacity of 32 seated passengers per carriage.

Trains for a normal service consisted of six-carriages, three two-carriage units marshalled together which consisted of a Driving Motor, and a Trailer which formed a semi-permanent two-carriage unit with an automatic coupler at each end. The driving motors where slightly larger to accommodate the drivers cabin with the other dimensions being identical.

The C77 stock was identical in layout and ordered to replace the CO/CP stock on the Edgware Road to Wimbledon route on the District line. There where 33 Driving Motors and Trailers ordered which where marshalled into two-carriage units that interran with the C69 stock.

The equipment was constructed included a load sensing metacone air suspension, rheostatic brakes, hydraulic parking brake, pneumatic camshaft control which was provided by General Electric Company and Brush DC motors, with each driving motor being provided with four-motors. The air supply was by Reavell reciprocating compressors and breaking equipment from Westinghouse, the guards door controls where located in the drivers cabbin which eased the conversion to one-person-operation between 1983 and 1984.

Following the West Ham IRA bomb attack in March 1976, an additional C77 stock carriage was added to the order which became a hybrid unit between C69 and C77 stock and was selected for a trial refurbishment by British Rail Engineering Limited (BREL) in Derby during 1989.

Following the 7 July 2005 London bombings, two cars where damaged and scrapped above the solebar. The remains where used to construct two new carriages and renumbered the same numbers as the scrapped carriages.

Each train was made up of three two-carriage units, which comprised of a Driving Motor at 16.030m (52ft 7.1in) in length and a Trailer at 14.97m (49ft 1.4in). Each carriage came with four pairs of double doors on each side of the carriage, 32 seats and a public announcement system. The motor carriages where equip with rheostatic brakes, although there where some minor differences between the two batches of stock, they where interchangeable and could be coupled together. After their refurbishment between 1991 and 1994 there where no visual differences between the two batches with the unpainted exterior being painted red, white and blue.

When the stock was delivered the carriages where devided by partitions adjaset to each set of doors, this had two pairs of transverse seating, this limited the standing room inside the carriage. During their refurbishment these where removed and longitudinal seating provided.

The C08 stock, commissioned to replaced two damaged carriages, where numbered 6606 and 67

The C69/77 stock has been withdrawn from service and replaced with the S7 stock, which was rolled-out between 2012 and 2014. As a trial set numbered 5595 + 6595 where cannibalised resulting in a plan to withdraw the unit in 2014. A side-swipe in July 2012 at Hammersmith depot resulted in two sets, numbered 5532 + 6532 and 5575 + 6575, being damaged beyond economic repair and was set to Northwood sidings on 15 October 2012 where it was subsequently transported to Eastleigh Works for scrapping.

The withdrawal of the C69/77 stock was officially announced on 2 January 2013, when the first full six-carriage train, numbered 5515 + 6515 - 5519 + 6519 - 5732 + 6732 was transported to Northwood sidings where it was loaded onto lorries and scrapped. One train was removed every week or two until 2014, however delays to the introduction to the S7 stock because of modifications that where needed to the S8 stock, the withdrawal process was temporarily delayed, which resumed on 26 April 2013 with the withdrawal of unit numbered 5528 + 5588 + 5701 being taken to Acton Works for its removal from the network.

The second train which was held in reserve for the rail-tour, was taken to Ealing Common depot on 4 July 2014 and subsequently loaded onto trucks and transported to Rotherham works where it was scrapped along with much of the A60/62 stock and C69/77 stock. The final rail-tour train was taken to Ealing Common depot of 9 July 2014 where it was also loaded onto tracks and scrapped at Rotherham Works, there is only one carriage which is preserved at the London Transport Museum Acton depot.

Carriage numbers 5701 and 5720 from the C77 stock where donated by Transport for London to educational establishments with another carriage being retained by the London Transport Museum in their Acton depot. 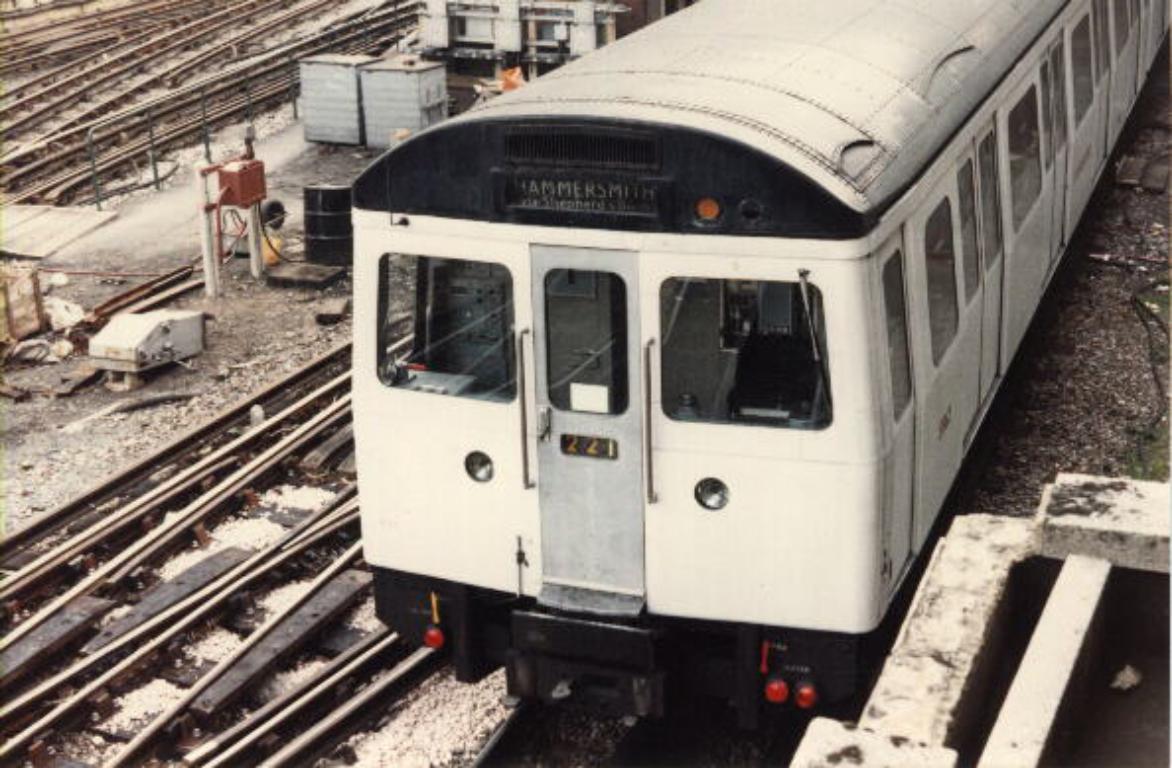 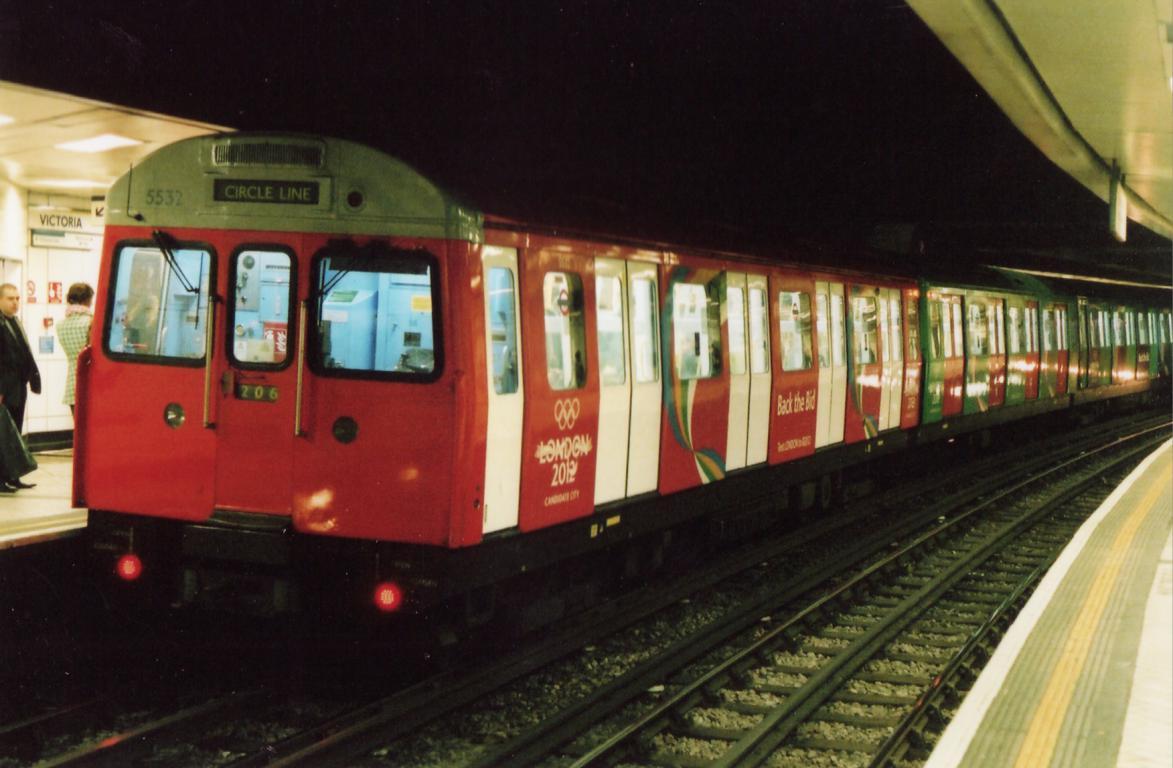 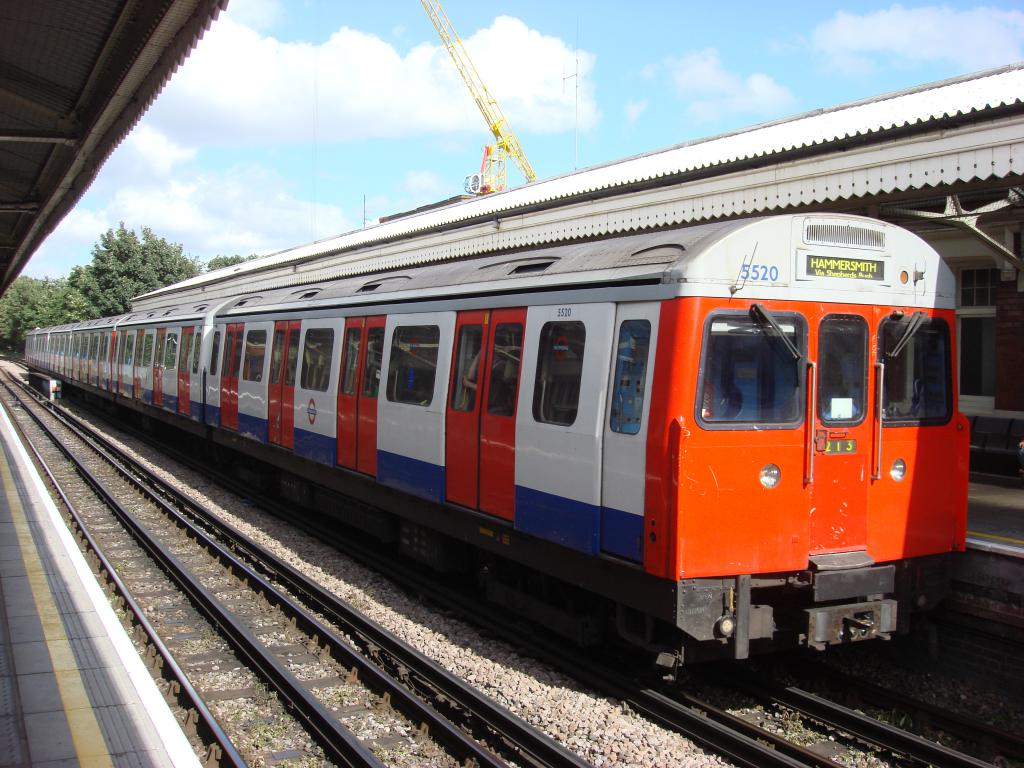 Hammersmith and City line at Ladbroke Grove to Hammersmith 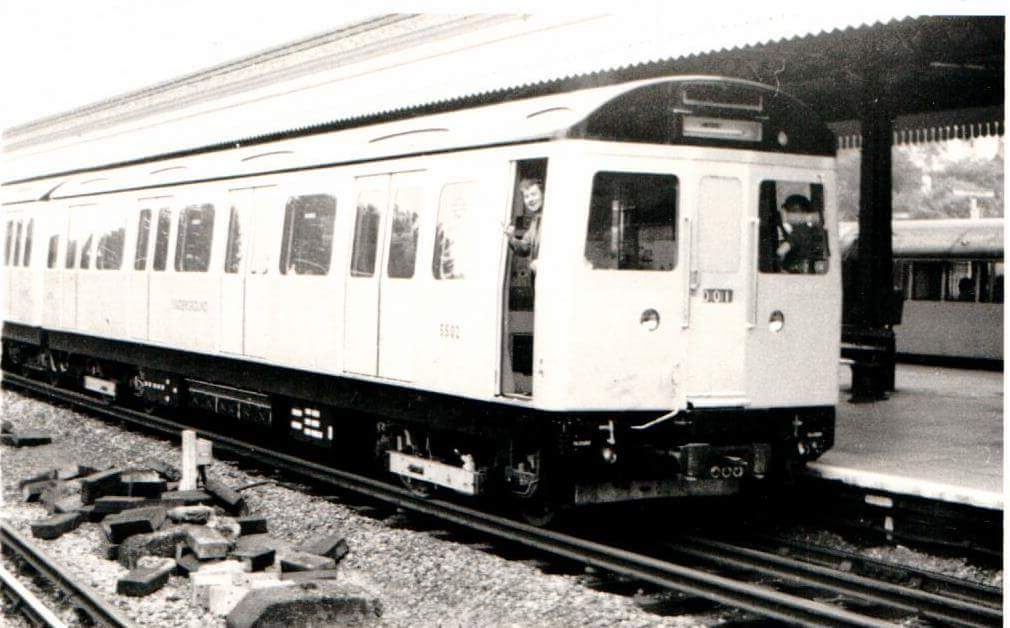 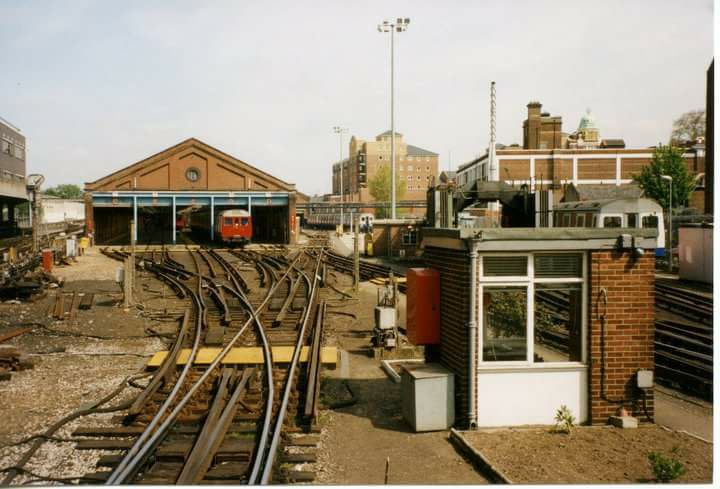 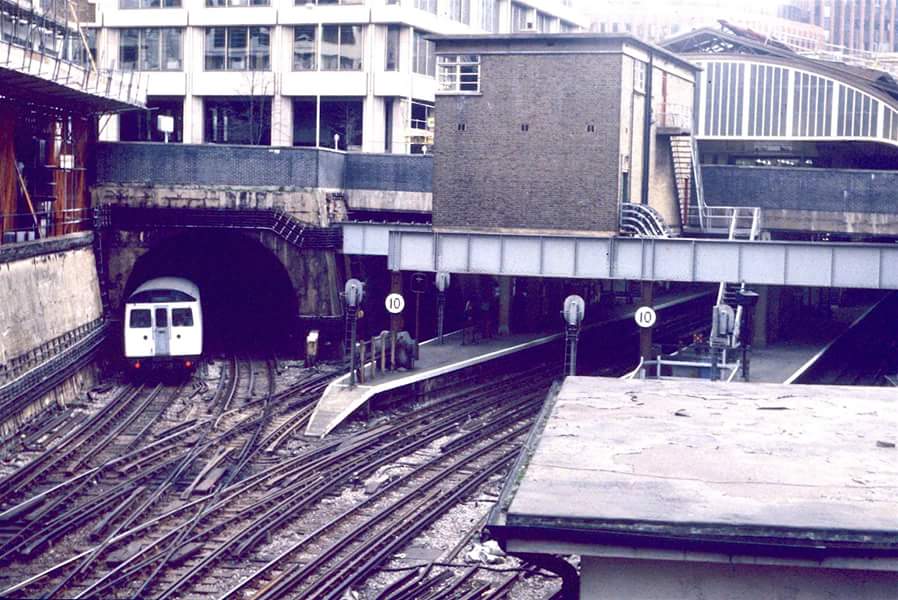